Zusammenfassung:
Exercise increased caution elsewhere in Papua New Guinea due to violent crime and the potential for civil unrest (level 2 of 4).

Zusammenfassung:
Avoid non-essential travel to the Hela and Southern Highlands provinces due to ongoing violent tribal clashes and politically motivated unrest (level 3 of 4).

Zusammenfassung:
Last Update: Reissued with updates to health information. Reconsider travel to Papua New Guinea due to crime and civil unrest.  Exercise increased caution due to unexploded ordinance, ongoing elections, and volcanic activity.  Some areas have increased risk.  Read the entire Travel Advisory. Do not travel to: Southern Bougainville, particularly areas near the Panguna mine, due to civil unrest. The Highlands region due to civil unrest. Country Summary: Violent crime, including sexual assault, carjackings, home invasions, and armed robberies, is common. Tensions between communal or tribal groups may result in violence at any time without warning.  Police presence is limited outside of the capital Port Moresby, and police may be unable to assist due to limited resources. Exercise increased caution throughout the election period and subsequent formation of a new government, which runs from May 12, 2022 through the end of August 2022. Historically, the election cycle has led to increased demonstrations which often become violent, typically between rival political parties and their supporters, especially after polling ends, during vote counting, and when results are contested or challenged.  Public demonstrations, especially in population centers, and protests intended to be peaceful can quickly turn confrontational and become violent. The U.S. government has limited ability to provide emergency services to U.S. citizens outside of Port Moresby due to limited transportation infrastructure. U.S. government employees must obtain authorization before traveling to areas of concern, including the southern part of Bougainville, Lae, Mt. Hagen, Southern Highlands Province, Hela Province, and other areas of Papua New Guinea where one is unable to fly directly. Travelers should exercise increased caution when traveling in remote areas of Papua New Guinea due to the presence of unexploded ordinance (UXO) remaining from World War II.  UXO is discovered infrequently throughout the country, often on smaller islands. Papua New Guinea is home to several active volcanoes.  The most recent major eruption occurred in June 2019 at Mt. Ulawun, on the eastern end of the island of New Britain. The eruption caused widespread ash fall, the displacement of local communities and more than 5,000 local inhabitants, and the temporary closure of the international airport in Hoskins.  U.S. citizens are advised to familiarize themselves with active volcanoes in Papua New Guinea, exercise increased caution when traveling near them, and develop contingency plans in the event of an eruption. Read the country information page for additional information on travel to Papua New Guinea. Healthcare across Papua New Guinea is inconsistent and may be difficult to obtain outside of Port Moresby. Pharmaceuticals may be scarce or unavailable. 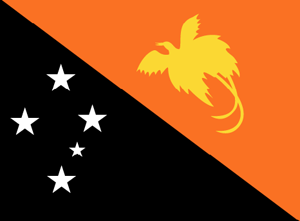