Zusammenfassung:
Exercise increased caution elsewhere in Ecuador due to crime and civil unrest (level 2 of 4).

Zusammenfassung:
From 1 November, a 45-day state of emergency has been declared in the Guayas, Esmeraldas and Santo Domingo de los Tsáchilas provinces (see 'Safety'). We advise: Reconsider your need to travel to Ecuador overall due to civil unrest and increased security threats. Higher levels apply in some areas. 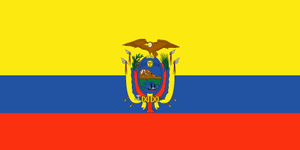