Reisewarnung.net is a private project of Nils Haack. It is a try at making travel advisories, issued by different authorities, comparable. The single sources are linked at the country profiles, so you can verify them if wanted.

We don't make up advisories. We just try to give them a ranking between 0 (no advisories) to 5 (distinct travel warning). Since I'm often asked: a risk level of 2.0 (often seen for countries like e.g. Germany) is not an indicator of immediate threats. It just shows, that some countries have issues some sort of advisories.

As a quick reference we have integrated the current data from the European Centre for Disease Prevention and Control. This data is shown on the World Map (table below map) and on the country profiles. This data is updated every morning at 8.30 am (CET) and shows the current and official numbers. The number of cases is not calculated into the risk index at the moment.

What is this danger / warning index?

Different authorities from different countries have different ways in how situations abroad are described. The same applies to the warning levels in the travel advisories. To make this data scalable and comparable, the single advisory is given a number between 0 (very safe) and 5 (seriously dangerous). The decision as to what danger level a message is given, is based on specific words or ratings found.

The average index of all travel advisories for a country formulates the travel warning index or danger level for a country. Since this is done automatically, the actual danger situation can differ from the simplification shown. Still though, it is a good starting point for assessing the situation. The more sources used, the more reliable the result.

How reliable is the data?

Countries could be rated more dangerous or safe than it actually is as part of a political agenda. Additionally, it is sometimes hard to identify local problems, as such the whole country may be given a more dangerous level. Sometimes regions are combined into one country (e.g. Israel, Gaza). Also for very large countries but with intense local conflicts, the whole country may be given a comparitevly high level (e.g. Russia). But also the contrary, a country that is indicated as safe can have local conflicts. The reason for this is often a lack of presence in the digested travel advisories

Due to the nature of colelcting data from many sources, some disputed borders or territories could be ignored or misslabeled. This is no taking sides on any political agenda.

How often is the data updated?

The information on Reisewarnung.net werden is updated daily, usually in the morning. This updates includes all countries featured.

Where is the data from?

Currently we aggregate the travel advisories of 6 different authorities/nations. Depending on availability, we use RSS or XML Feeds of the corresponding authorities or directly analysze their websites. The following authorities are currently used as sources.

The integration of a countries travel advisories is based on the technical availability and complexity. As such it is no expression of political opinion. 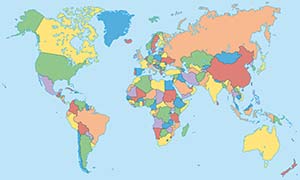