It is not safe to travel Syria.

Syria is a country in Asia (Western Asia) with around 20 million citizens and a land mass of 185,180 km². We detected travel advisories from 8 sources for this country.

Syria shares land borders with 5 neighbouring states. For this country, the Danger Index is 3.6 (average value for all countries). All countries habe been reported as somehow dangerous: Iraq (4.8), Turkey (3.5), Israel (3.3), Jordan with (3.3) and Lebanon with (3.2 of 5). See danger map of the region.

Brief summary:
Do not travel to Syria due to the ongoing civil war and extremely dangerous security situation (level 4 of 4). There is a significant risk of terrorism, violence and kidnapping throughout Syria. A number of foreign nationals have been targeted and some have been murdered. We strongly recommend any New Zealanders currently in Syria depart immediately or as soon as it is safe to do so. As there is no New Zealand diplomatic presence in Syria, the ability of the government to assist New Zealand citizens requiring consular assistance is severely limited.

Brief summary:
Entry and exit measures for Syria may change without notice. You don't need a negative COVID-19 test result or proof of vaccination to enter. If you’re planning to cross to Lebanon, contact Lebanese authorities for requirements. The security situation remains extremely volatile. If you're in Syria, leave as soon as possible. We advise: Do not travel to Syria due to the extremely dangerous security situation. Armed conflict is ongoing and air strikes, kidnappings and terrorist attacks are common.

Brief summary:
Last Update: Reissued with updates to health information. Do not travel to Syria due to terrorism, civil unrest, kidnapping, armed conflict, and risk of unjust detention. Country Summary: The U.S. Embassy in Damascus suspended its operations in February 2012. The Czech Republic serves as the protecting power for the United States in Syria. The U.S. government is unable to provide any emergency services to U.S. citizens in Syria. Syria has experienced active armed conflict since 2011. No part of Syria is safe from violence. Kidnappings by armed groups, unjust arrests and/or detentions, the use of chemical warfare, shelling, and aerial bombardment of civilian centers pose significant risk of death or serious injury. The destruction of infrastructure, housing, medical facilities, schools, and power and water utilities has also increased hardships inside the country. The U.S. government particularly warns private U.S. citizens against traveling to Syria to engage in armed conflict. U.S. citizens who undertake such activity face extreme personal risks, including kidnapping by armed groups, unjust arrests, injury, or death. The U.S. government does not support this activity. Our ability to provide consular assistance to individuals who are injured or kidnapped, or to the families of individuals who die in the conflict, is extremely limited. Protests and demonstrations are quelled by government forces through aggressive tactics and protestors, activists, and political dissenters are routinely detained without access to legal representation or communications with friends and family. Terrorist groups are active in Syria. Parts of Syria have experienced recent increases in incidents of bombings, IEDs, and assassinations. Fighting on behalf of or providing other forms of support to designated terrorist organizations, including ISIS and al-Qaeda affiliates, can constitute the provision of material support for terrorism, which is a crime under U.S. law that can result in penalties including prison time and large fines. There is an ongoing risk of kidnapping and detentions of U.S. citizens and Westerners throughout the country. U.S. citizens remain a target. U.S. citizens are also targets of abduction and/or unjust detention by the Syrian government and while in detention do not have access to due process or medical attention. Government detention centers are known to be unsanitary facilities where widespread cruel, inhumane, or degrading treatment of detainees has been documented, as well as torture and extrajudicial killings. Minors, persons with physical, sensory, or mental disabilities, and elderly have frequently been victims of unjust detention. The Syrian government has also been implicated in the enforced or involuntary disappearance of more than 100,000 citizens, including medical and humanitarian workers, journalists, human rights activists, political opposition, and additionally those suspected of affiliation with these groups and their family members. Note: Only the Syrian government can issue a valid entry visa to Syria. Failure to obtain a legitimate entry visa directly from the Syrian government could result in detention. Due to risks to civil aviation operating within or in the vicinity of Syria, the Federal Aviation Administration (FAA) has issued a Notice to Air Missions (NOTAM) and/or a Special Federal Aviation Regulation (SFAR), which says that heightened military activity associated with the Syrian conflict may result in the risk of GPS interference, communications jamming, and errant long-range surface to air missiles straying into adjacent airspace within 200 nautical miles of the Damascus Flight Information Region. These activities may inadvertently pose hazards to civil aviation transiting the region. It also has the potential to spill over into the adjacent airspace managed by neighboring states and eastern portions of the Mediterranean Sea. Read the country information page for additional information on travel to Syria. 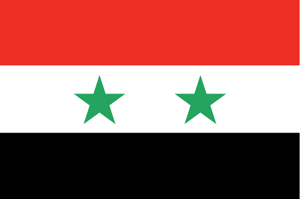 This section gives some brief answers to common questions regarding travel safety in Syria.

We got distinct notes that traveling Syria isn't safe right now. The risk index is at 5 out of 5 possible points. We advise against travel.

How many countries have issued advisories for Syria?

We currently know of 8 countries having issued advisories for Syria.

Syria shares land borders with 5 neighbouring states. For this country, the Danger Index is 3.6 (average value for all countries). All countries habe been reported as somehow dangerous: Iraq (4.8), Turkey (3.5), Israel (3.3), Jordan with (3.3) and Lebanon with (3.2 of 5). See danger map of the region.