It is not safe to travel Burundi.

Burundi is a country in Africa (Eastern Africa) with around 9 million citizens and a land mass of 27,830 km². We detected travel advisories from 5 sources for this country.

Burundi shares land borders with 3 neighbouring states. For this country, the Danger Index is 3.2 (average value for all countries). All countries habe been reported as somehow dangerous: Democratic Republic of the Congo (3.7), Tanzania with (3.0) and Rwanda with (2.8 of 5). See danger map of the region.

Brief summary:
Do not travel to the border areas with the Democratic Republic of Congo and with Rwanda due to the risk of armed attacks (level 4 of 4).

Brief summary:
You're no longer required to present a negative COVID-19 test prior to travelling to Burundi. You must take a COVID-19 test on arrival and self-isolate at a hotel of your choice for 24 hours until you receive the test results. If you test positive for COVID-19, you'll be asked to self-quarantine at your own cost. There is no longer a requirement to present a negative COVID-19 test to depart Burundi. (See 'Travel'). We advise: Reconsider your need to travel to Burundi overall due to the threats of terrorism and political violence.

Brief summary:
Last Update: Reissued with updates to health information. Reconsider travel to Burundi due to crime, health, and political violence. Country Summary: Violent crimes, such as grenade attacks and armed robbery, occur frequently. Though Westerners are unlikely to be targeted, the risk of being in the wrong place at the wrong time is high. Local police lack the resources and training to respond effectively to crimes. Medical services in Burundi fall well below U.S. standards, and there are no adequate trauma services in the country. Emergency medical and fire services are limited or non-existent in some areas of the country. There are ongoing political tensions in Burundi, causing sporadic violence throughout the country. Police and military checkpoints are common and can restrict freedom of movement. Police have conducted weapon searches in the homes of private citizens. In the provinces of Cibitoke and Bubanza, near the border with the Democratic Republic of Congo (DRC) and Rwanda, as well as Mutimbuzi commune in Bujumbura Rural province, there have been armed attacks primarily conducted by groups operating from the eastern DRC. The border may close without notice. The U.S. government has limited ability to provide emergency services to U.S. citizens throughout Burundi. U.S. Embassy personnel are subject to restrictions when traveling in certain areas of Burundi and may be subject to other constraints as security conditions warrant. These restrictions include limitations on all travel during hours of darkness (typically 6:00 p.m. to 6:00 a.m.) and require prior approval for travel outside of the Bujumbura Mairie Central area. The former Central Market located on Chaussee Prince Louis Rwagasore is off-limits to U.S. Embassy personnel at all times, due to high rates of crime.   Due to travel restrictions on U.S. Embassy personnel, the U.S. government is unable to provide emergency services to U.S. citizens in the following areas: the provinces of Bubanza and Cibitoke, Kibira National Park (including the park’s southernmost part in Muramvya province), and Ruvubu and Buriri Forest. Embassy personnel are also prohibited from transiting through Kibira National Park to reach Kayanza via the RN-10. Read the country information page for additional information on travel to Burundi. 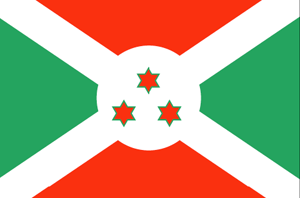 This section gives some brief answers to common questions regarding travel safety in Burundi.

We got distinct notes that traveling Burundi isn't safe right now. The risk index is at 4.6 out of 5 possible points. We advise against travel.

How many countries have issued advisories for Burundi?

We currently know of 5 countries having issued advisories for Burundi.

Burundi shares land borders with 3 neighbouring states. For this country, the Danger Index is 3.2 (average value for all countries). All countries habe been reported as somehow dangerous: Democratic Republic of the Congo (3.7), Tanzania with (3.0) and Rwanda with (2.8 of 5). See danger map of the region.